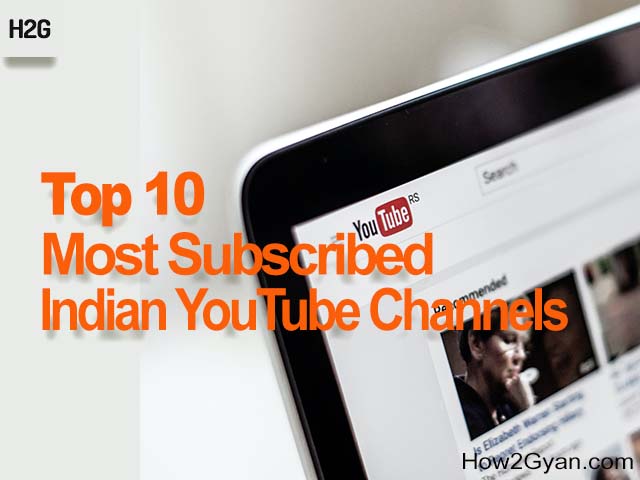 T-Series has the title of the most subscribed YouTube channel with more than 171M+ subscribers as of February 2021. T-Series associated with the Indian music industry. They deliver some of the most popular Hindi songs – Vaaste, High Rated Gabru, Aankh Marey (Simmba), Dilbar, etc. T-Series’ top 3 videos hit billions of views on YouTube.

Zee TV is also a leading Hindi language entertainment TV channel owned by the Essel Group in India. The channel has also associated with several other sister channels that provide services in Tamil, Hindi, English, and several other regional languages of India. This channel is for TV serial lovers you can enjoy your favorite Zee TV serial’s episodes on their YouTube channel.

Goldmines Telefilms occupied the 5th position of the most subscribed YouTube channel in India list with more than 49.1M+ subscribers. This one is for movie lovers who watch movies on YouTube. You can watch your favorite south Indian movie Hindi dubbed in Goldmines Telefilms YouTube channels. Some most popular movies on this channel – The Super Khiladi 3, DJ (Duvvada Jagannadham), Dear Comrade, No. 1 Dilwala, etc.
You may also like top10 YouTube channels to watch south Indian movies Hindi dubbed.

CarryMinati owns by Ajey Nagar is the only individual YouTube channel in the list of the top 10 most subscribed YouTube channels in India with more than 28.8M+ subscribers as of February 2021. He is famous for his comedic skits and reactions to various online topics on his channel CarryMinati.

Gaane Sune Ansune is also one of the channels for music lovers with a golden collection of 90’s super hit melodies music videos. This channel occupied the 9th spot of the list with more than 26.9M+ subscribers. In this channel, you get music from different genres, Lyrical, Bhangra, Indi-Pop, Bollywood, and more.

India TV is also a leading Hindi news channel based in Noida, India. The channel was founded on 20 May 2004 by Rajat Sharma and his wife Ritu Dhawan. India TV’s YouTube channel has more than 23.8M+ subscribers, makes it the 10th most subscribed YouTube channel in India and also second as a news channel. India TV streams live breaking news, latest news, current affairs, and more from across India and the world.
Those are the top 10 most subscribed Indian YouTube channels as of February 2021.
I hope you like this interesting information. If you like to read our blog post then do share it on the social platform – Facebook, Twitter, WhatsApp, etc. And also ask your query in the comment section below.